Enjoy a memorable vacation and experience Canada at your own pace in a CanaDream RV.

From Coast to Coast, Canada&#39;s spectacular scenery and one-of-a-kind
experiences will leave you spell bound and wanting more. An RV road trip is
the best way to explore the length and breadth of this amazing country. Our
travel advisors will help plan your itinerary and choose the vehicle that meets
your needs best, so that you can hit the open road with confidence. Contact
your BST Vacations Travel Advisor to plan your RV adventure!

The CanaDream fleet is built to the highest North American standards and is very modern; with a fleet of units from brand new to their 3rd season. With the exception of the Winter MHA units, the majority of the fleet is parked between mid-October and late April, so they are really used for 5 months a year. They pride themselves on having state of the art on-site servicing and rental units are expertly maintained. CanaDream has seven locations across Canada: Calgary, Alberta; Edmonton, Alberta*; Halifax, Nova Scotia; Montreal, Quebec; Toronto, Ontario; Vancouver, British Columbia; Whitehorse, Yukon.

*Edmonton is a franchise location and vehicle variations may apply. 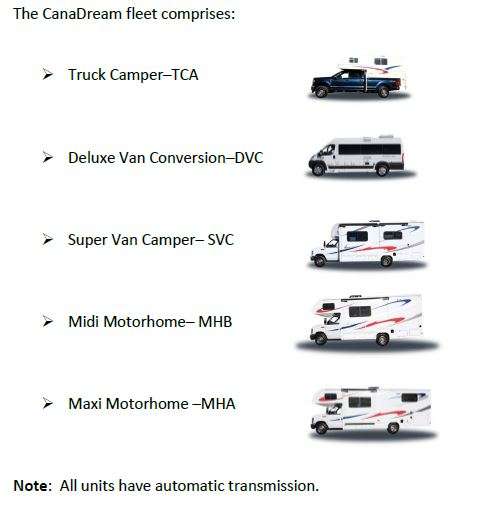 A road trip allows you to travel at your own pace. To ensure you get the most of their vacation, a minimum 5-night booking period applies. Vehicles can be dropped off earlier, but the minimum payment is 5 nights.

For more information or to reserve your CanaDream RV, please contact your BST Vacations Travel Advisor.