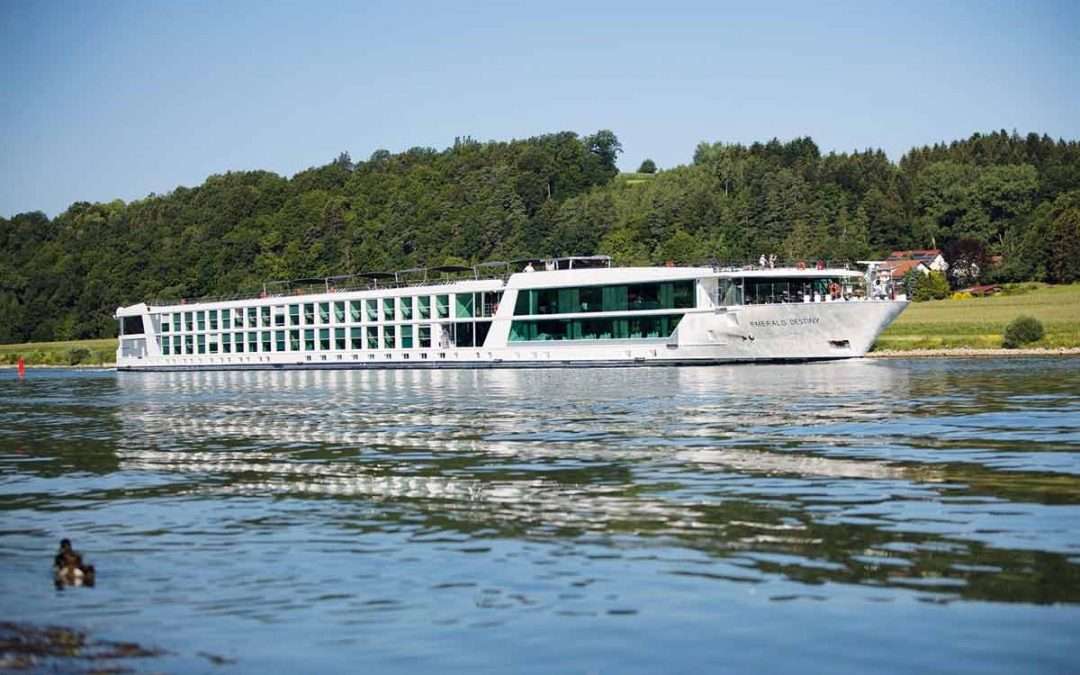 I was fortunate enough to experience the Danube Explorer itinerary, aboard the newly inaugurated Emerald Destiny recently travelling from Passau to Budapest. While I have travelled aboard cruise lines in the Caribbean, this was my first experience on a river cruise. I would like to share my experience with you. While the cities and towns visited were absolutely stunning, this post is to note what a river cruise experience is like, and to compare with a larger cruise line operation. These are of course my personal observations on the similarities and differences. I am sure there are more, but this is what stands out to me.

In preparation for the cruise, we were sent a day by day itinerary showing us what the INCLUDED excursion was for each day we were in the various cities/towns. These were generally city walking tours with a local guide. One thing about Europeans, they absolutely love their history and are proud to tell you about it. I was amazed at the wealth of information each and every one has. In addition to the included excursions, optional ones were available as well. These were at a cost, but I would consider them reasonable for what you are getting. In comparison, on an ocean cruise – excursions are always extra, and are NOT included.

The documentation for the cruise includes a detailed itinerary, a map of the route, luggage tags (NOT paper, but actual tags), and a document portfolio. It zippers closed, which keeps all the necessary paperwork together and harder to lose. It has five separate pockets. It is a keepsake that can be used repeatedly. My last ocean cruise, I got a paper confirmation, and paper luggage tags. It was a nice touch.

Let’s consider the size of the ships themselves. I’m not sure what the number is to consider it a ‘boat’ or a ‘ship’, but I look at the river cruise ships as more of a ‘boat’ than as ship. On an ocean cruise, there could be THOUSANDS on the ship. On a river cruise, due to it’s size – there are generally no more than 200 guests. This brings me to my next point. On my sailing, there were 143 guests. There was never a time, including boarding, that I was lining up for anything! I never felt like I was crowded, or that someone was in my personal space. My introduction to the entire ships’ occupancy was at our welcome orientation. This was held in the Horizon Lounge, which has seating for everyone on board. It is relaxed and intimate, but still gave you lots of personal space.

To backtrack just a touch. I flew in to Munich. On arrival, and after collecting my luggage, I exited from the baggage area to be met by a representative of Emerald Cruise Lines. There happened to be eight of us off the flight that we were on. We were then lead by this representative into a café where we were able to get a coffee, Danish, beer, whatever you wanted (even at 900am in Germany) to await our included transfer. Yes, the transfer to the ship is included as well! We waited until a few more guests joined us, and we were all then taken to an awaiting bus to take us the two hours to the pier in Passau. After an eight hour flight, it was relaxing and many grabbed a quick nap. Those that didn’t were able to enjoy the scenery along the way, including a commentary by our guide. No need to tip the driver or the bus guide, as it is included with the cruise pricing.

On arrival at the ship, we walked from the gangway directly onto the ship itself. Your luggage is taken the cabin for you. Passports are surrendered at the desk, and you are handed a key. That’s it! You are checked in. A purser takes you to your cabin (right away), and you are shown the lighting, TV, how the curtains work, the electrical, the washroom, etc. There are a couple differences here to an ocean cruise. First is checking in. When departing from a cruise in Fort Lauderdale for instance (again, from personal experience only), you are directed into your own line. This line will be for a certain deck, for a certain cabin category. You know, deck 2-3-4 go to line A, deck 5-6-7 go to line B, etc. You are then going through the queue weaving back and forth, back and forth, everyone together, just waiting your turn! The process can take some time. You give them your passports, your picture is taken, they produce your room card, and then you are able to board. You CAN’T go to your cabin right away, as the halls are blocked. You are asked to explore the ship, go to the buffet, etc. but the staff needs time to get your luggage to your cabin. Now, let’s go back to Emerald. I literally walked up the gangway, handed in my passport, was given my key and I was in my cabin within 5 minutes. Absolutely NO waiting whatsoever!!! What a seamless check in process. It doesn’t hurt that my cabin was literally down the hall from the reception desk. Which brings me back to the size.

On an Emerald Cruise Line there are elevators available for those in need. But one thing to remember – there are only THREE decks. The stairs were just fine! It literally takes 3 minutes to walk from one end of the ship to the other. Let’s try to do that on an ocean ship. Many also have the elevator shafts, or open areas through the middle, which makes it impossible to walk from one end to the other. This doesn’t happen on a river cruise and I would hope that there is no way that you can get lost if you can count from 1 to 3.

Whether a river cruise boat, or an ocean cruise ship; the standard cabins are generally smaller than a hotel room, but are designed to take full advantage of the space available. I was in a balcony suite, with two twin beds. I’m not going to say there was LOADS of room around the beds, but there was enough. The option is available for the beds to be put together into a king in any cabin as well. This is the same as an ocean cruise ship. Washrooms on Emerald are possibly a touch smaller than one on an ocean cruise; but hey, you don’t need much room for what you need to do. Showers are powerful, and with the glass doors appear larger. This is generally the same on an ocean cruise. Shower and bathroom amenities are provided on each. If you run out, they give you more. There are other river cruise companies with larger bathrooms, but for my comparison, I can only provide what I know.

Bedding is super comfortable, towels are fluffy. I was in what is called a Panorama Suite. You are literally given an entire wall of windows – floor to ceiling. This can be opened from the top to the half way point to allow loads of 1) light, and 2) fresh air. There are also floor to ceiling darkening blinds, so privacy is not an issue. There is a sitting area by the window, which makes it similar to a balcony cabin. I found this space to be a great asset! The river cruise ships are much narrower than an ocean cruise ship. To be honest, this ‘balcony’space was used very little. I much preferred being on the top deck or in the lounge when I was sightseeing from the indoor space.

After settling in to the cabin, we went exploring.